Jon D
My blog will tell you much more than I can write here.


The conclusion of my motivational speech.

2. No one can give you better advice than yourself. Marcus Somebody

Dancing in the street

So, I've been away for a while....in a virtual sense. But this is not to say that I've had nothing to write about, quite the opposite.

I'm not a student anymore, I've moved from one country to another, I've started a new career, I've shaved and I'm currently winging my way across Europe without any socks. On my travels I've found Frankfurt-ians to be not the most responsive people towards buskers, although Prague-ians were more than willing to show they cared.... 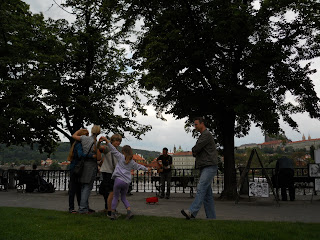 This time tomorrow I'll be in Cardiff, all things being equal, and I'm going to see how much Cardiffians appreciate street music.

It's also surprising where busking takes you...

A lady with a dog happened upon me while I was playing behind the national bank in Bucharest and apparently she liked something I was doing. She turned out to be the wife of a famous Romanian folk singer and invited me to play at the Teatrul Bulandra at an arts festival, it went well. Also while busking I've appeared in engagement videos, holiday snaps, I've received offers of food (I think they thought I looked hungry), I've been given paper clips, flowers, sweets, seven different currencies and a kiss from a homeless lady....amongst other things.

Thought for the day: Never underestimate the lady with the dog

I also spent the time considering what to do if nobody came for it...nobody did.

There were two options I could see, hand it in or keep it. But it wasn't a difficult choice, I was never seriously going to hand it in...only joking :) But, I would be lying if I said I didn't think about that option. So I took it and and dutifully found the 'left baggage' counter.

Now...the look that the attendant gave me when I said,

was priceless. It was a puzzled look that said,

and then without saying a word to me...not a single word... he just handed me a form to fill out.

It turned out that there was £280.50, 225 Euros, the owners Romanian ID card and various other things in the said purse.

You might be asking the question "Why didn't you keep it you idiot?", and it might be a good question. I'm not completely sure of my reasons, maybe I thought the costs outweighed the benefits, or maybe it was just my way of paying it forward...

So if you know a Raluca Ioana Zaharescu, tell her I know where her purse is...also ask her why she left 7 minutes before her internet credit ran out...criminal!!
Posted by Jon D at 23:35 4 comments:

Slow down everyone, you're moving too fast.

So, Alexander McQueen is dead, am I sad? Yes I'm sad, because somebody's brother, somebody's son, somebody's friend is dead, not because we've lost a celebrity designer. I'm not a fan of the eulogizing that goes on when somebody dies, especially when the media report on a celebrity death.

Now, I knew nothing about Mr. McQueen before today, other than the fact that he was a well respected designer...and that he had a very cool second name. But, I watched an interview with another famous designer today discussing his life, and apparently, and I quote, "Alexander only had one failing", he was not concerned enough with 'commercial success' and was too concerned with making a statement, be it political, religious or other...

Are we so far gone, that making a statement is a failing???

I originally wrote "what a load of ****!!!" before the previous sentence, but I thought it was a bit strong.

Anyway, a month on, and I notice Haiti has disappeared from the news completely...I guess everything is back to normal now....

If you're wondering what that is, I can't tell you, because I have no idea...or maybe I do but it's a secret ;)

I attended a lecture today and to make one of his points a little more memorable, the lecturer - I won't tell you his name Steve - said, "if you're ever in a pub quiz and they ask you, what was the difference between Emile Durkheim and Karl Marx, Durkheim liked the division of labour and Marx didn't"

What kind of pub quizzes does he attend???

Take a look at this video, then tell me what you watched on TV last night ;)

In the Blackness of the Night....

The last four days have been made up of absolute highs and absolute lows. Some of the highs and most of the lows have played themselves out in the virtual world. So it got me thinking, and my thoughts strayed completely...and this is the result!!

The idea of context is a huge part of conversation, when I say context I mean body language, facial expression, voice intonation, etc. I've been told it's as much as 90% (from a very reliable source close to my heart). This is ok in the real world, but, in emails and sms's this context is almost entirely missing.

Now, up to this point most of what I've said is believable to the majority, but this is where I split people into two groups...the lovers and the haters!!

It has become fashionable amongst the 'virtual elite' :o to label these little symbols as too childish to use. :( Maybe they have a point, but maybe they don't. In fact, it might be the closest that the virtual world comes to non-written context :D If online chat is to be meaningful some context is required.

Do you want an example?

I challenge anyone to say that those mean the same thing....but be careful if you do challenge it, you might be labelled 'virtual elite' ;)

If you add to this lack of context the problems of language translation ;) the use of common symbols could be an important part of a solution, possibly for an internet generation, they may already be :D

Thoughts for the day....

Imagine a world where there are only online ineractions, where we all live in boxes with computers in front of us...Visit someone and make them smile :D


#I'm a fugitive, community has driven me out
For this bad, bad world I'm beginning to doubt#

I will be on the road again tonight, heading for the ice and snow. It's a great time, those moments before you leave your house to travel. In the days leading up to it there might be a million and one things on your mind, but as the departure becomes more imminent, all these things fade, until the moment arrives and all you think about is, "Have I got my passport?". Then once you have left the house...and in my case my journey usually starts with a bus trip...you take on a whole new identity. Even though I'm on a bus which I take regularly, now I'm on it as 'a traveller'. Everything seems different, my clothes, my attitude... A spring develops in my step, my thoughts start to travel on far narrower lines, day to day worries are left at home and a whole new set of thoughts replace them. This is one of the great joys of travelling and one of the reasons I love it so much, but it's not the whole story....

If you travel for long enough (in my experience this is any more than three weeks) it's possible to suffer from what I like to call (after a conversation in Vietnam) 'The Doom'. These are odd days where you start to question the reasons for everything, you start to ask yourself things like "What am I doing with my life?" and statements come out like "The problem is...I don't have a dream". There's no escaping these days you just have to accept them. Of course you can take drastic action...I have in the past...and return home. Or you can have a drink and then wake up the next day ready to take on a 32 hour train to Shanghai...or wherever you might be going.

I think the reason for all this is simple, no matter where you go and how far you travel, there's one thing you can never get away from, yourself. But this isn't a reason not to travel, the benefits far outway the downsides. In fact when I become world leader it will become compulsory to travel, to break out of your day to day and see how it works in other places. You soon realise that a lot of what you hold as necessary in life, really isn't.

It's suprising how long you can actually wear the same set of clothes for....

So my love, I will be leaving soon!!

P.s. It was 7 cans, not 9, but I will leave the post unedited because it stands as a testament to the power of alcohol.
Posted by Jon D at 03:27 2 comments: